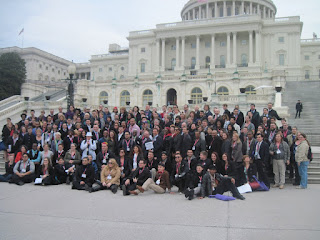 Hundreds of activists and their allies descended upon Capitol Hill on Thursday to lobby members of Congress to pass several LGBT-specific pieces of legislation.

Rea Carey, executive director of the National Gay and Lesbian Task Force, was among those who took part in the lobby day that coincided with the Task Force's annual Creating Change conference that will take place in Baltimore through Sunday. The activists specifically pushed for passage of the federal Employment Non-Discrimination Act, the Safe Schools Improvement Act, the Student Non-Discrimination Act and the Paycheck Fairness Act. They also sought the inclusion of sexual orientation and gender identity and expression in the Violence Against Women Reauthorization Act.

It’s nearly impossible to find educated people for this subject, however, you seem like you know what you’re talking about! Thanks