Is Santorum About to Become Iowa’s Comeback Kid? 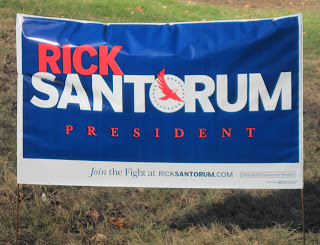 Santorum came in third in the Des Moines Register’s latest poll with 15 percent of likely Republican Iowa caucusgoers saying they will vote for him. The Family Leader President and CEO Bob Vander Plaats’ pre-Christmas endorsement certainly bolstered Santorum’s then-overlooked campaign. Will it be enough for him to gain enough traction to move beyond the Hawkeye State on Jan. 3?

A CNN/Time-ORC poll conducted between Nov. 29 and Dec. 6 found only two percent of likely Republican and Independent New Hampshire voters said they would vote for Santorum in the primary. His socially conservative message against marriage equality, the end of the Pentagon’s ban on openly gay and lesbian servicemembers, abortion and other issues will resonate far less with New Hampshire voters than their Iowa counterparts.

Conventional wisdom dictates that the economy will continue to dominate this year’s election cycle. Will Santorum determine otherwise (at least for a little while?)

Iowa caucusgoers will have their say tomorrow.

I love your blog.
You should add it in the new gay bloggers' platform.
http://www.bestgaybloggers.com

What I like is that you can meet other gay bloggers with similar interests,
and get many tools and tips for having more impact to your blog.
I just add my blog.
That 's why I give you the tip.
;)