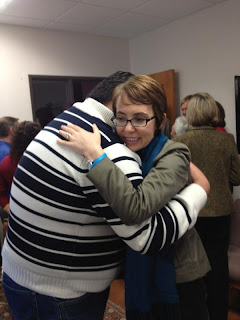 Arizona Congresswoman Gabrielle Giffords earlier on Monday posted to her Twitter account a picture of her embracing the gay intern who is credited with saving her life a little more than a year ago.

Jared Lee Loughner allegedly shot Giffords and 13 other people outside a Tucson supermarket on Jan. 8, 2011. Six people died in the massacre, but Daniel Hernandez, Jr., provided first aid immediately after the shooting that is credited with saving her life.

Giffords announced on Sunday that she would resign from the House of Representatives in order to focus on her recovery.